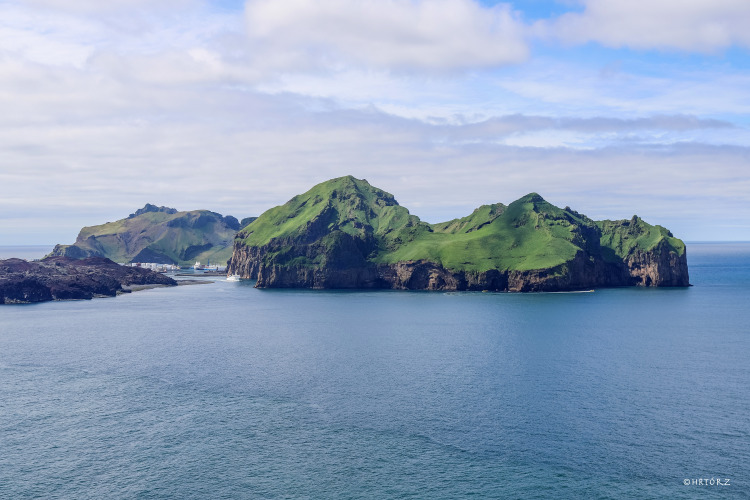 Vestmannaeyjar are made up of 15 islands and 30 rocks and skerries. Largest of the islands is Heimaey with a population of only 4.300 people.

The islands were built up over the past 10.000- 12.000 years in submarine eruptions of a volcanic system consisting of 70-80 volcanoes both below and above sea level.

But there is no need to worry, the newest island Surtsey was formed in 1967 after a four-year eruption. Only the longest volcanic eruption in Icelandic History!

Day trip to the Vestmannaeyjar

If you are longing to visit a destination with less tourists and more local interaction you have come to the right place. Vestmannaeyjar are considered to be one of the most exotic travel destinations in the country!

The trip to the Vestmannaeyjar takes only about 35 minutes one way. If you are travelling from Reykjavík, it will take you about 2 hours to drive to Landeyjahöfn harbor. Herjólfur sails seven times a day between Landeyjahöfn and Heimaey.

Vestmannaeyjar have the largest puffin colony of Europe. There are many ideal locations to view the puffins both from sea and from land.

In August- September the puffin hatchlings crawl out of their holes ready to take their first flight to sea. Many of these adolescence puffins get confused and land on the streets in danger of predators and cars. Therefore, the local children of the town form puffin patrols to save the baby puffins.

If you are visiting in August or September do not miss out on the annual baby puffin rescue.

Discover the volcanic past of Heimaey

23 of January 1973 the inhabitants of Vestmannaeyjar woke up only to find out that a volcano was erupting and spewing ash all over the town following by molten hot lava engulfing many of their houses. The evacuation of the island went well but the eruption lasted 5 months. With ash covering nearly the entire island the inhabitants still returned to reconstruct and dig up their previous homes.

In Vestmannaeyjar you can visit the museum built around one of the homes that was buried in the early hours of the eruption.

Vestmannaeyjar have a great selection of restaurants on the Island were you can get quality food prepared with ingredients from the island. Restaurants we specially recommend are